Can the hit Broadway musical “Hamilton” serve up some inspiration for the High Holy Days? Reflecting back on how I felt on the night of Feb. 25, 2016, on my way out of the Richard Rodgers Theatre in New York after seeing “Hamilton” (yes, with the full original cast!), I think the answer is yes.

“Hamilton” is a work of lyrical genius. It’s entertaining, creative and groundbreaking. But above all, Hamilton is a deep exploration of the human condition. “Who lives, who dies, who tells your story?” These existential lyrics appear in many of the show’s songs, and the theme persists throughout the “Hamilton” experience. “Once I wrote this passage, I knew it would be the key to the whole musical,” Hamilton’s creator, writer and star Lin-Manuel Miranda has said. The show is uplifting, depressing, funny, poignant, tragic and inspirational — all at once. The night I saw “Hamilton,” I laughed, cried, sang and felt troubled. Ultimately, I walked away still believing in humanity, filled with hope.

As I contemplate the coming High Holy Days, I look back on how I felt after seeing “Hamilton” as an ideal framework for a meaningful experience. Properly understood, Rosh Hashanah asks us to undertake a deep exploration of the human condition. Indeed, the Unetaneh Tokef prayer poses almost the exact same question as “Hamilton”: “Who shall live, who shall die?” As to “who tells your story,” the Rosh Hashanah Torah readings — like “Hamilton” — offer an honest profile of our story.

In “Hamilton,” we meet the founding fathers of America for who they really were: heroic, valiant yet flawed human beings. Miranda’s Alexander Hamilton is at once a larger than life, overachieving genius and a fatally flawed person whose life was scarred by dysfunctional relationships. Javier Munoz, who took over as the lead in “Hamilton” in July, believes that this honest and realistic portrayal of our nation’s founders (particularly their character flaws) is precisely why the musical’s story exerts such a potent hold on people. “They allow the audience to say, ‘I’m OK the way I am — flawed and human.’ It pulls them in closer.”

In the same spirit, the Torah readings on Rosh Hashanah offer an honest portrayal of Abraham and Sarah. On a day when we contemplate our own character flaws and imperfect lives, we read about Abraham and Sarah’s troubled relationship, the complex account of Ishmael’s birth, Sarah’s disturbing expulsion of Hagar and Ishmael and the infamous day when Abraham almost slaughtered his own child. Despite all of this, we also look up to Abraham and Sarah as people who helped shape the religion and faith with which we identify. We tell these stories on Rosh Hashanah — the anniversary of the creation of human beings — because they remind us that all people, including those we look up to as our founding patriarchs and matriarchs, are filled with character flaws. Much like the “Hamilton” experience, worshippers who read these stories in the Torah are “pulled in closer” to one of the existential truths that lie behind the Rosh Hashanah experience: human beings are imperfect, and despite that eternal truth, we never lose hope in our potential to achieve great things.

For two and a half hours, Hamilton’s creative blend of rhythmic hip-hop lyrics, powerful musical arrangements and thought-provoking messages sent me on a journey through the full gamut of human emotions.

Properly experienced, a Rosh Hashanah service should do the same. The rhythmic lyrics of the liturgical poetry should inspire us to sing and feel uplifted, the powerful music of the shofar should bring us to tears, and the rabbi’s message should be thought provoking. If your Rosh Hashanah experience involves laughter, tears and deep contemplation, and if sometime during services you should feel troubled, inspired, worried and then hopeful, Rosh Hashanah, like “Hamilton,” will have touched the deepest recesses of your soul. 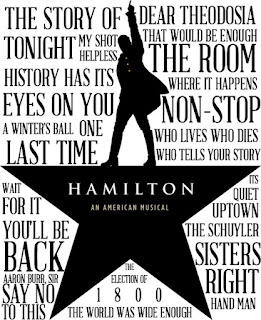 Of all the characters in “Hamilton,” the one who touched me most deeply was George Washington (played by Chris Jackson). His commanding stage presence and soulful singing of every lyric filled me with chills and brought me to tears. I felt privileged to convey my feelings to Jackson after the show, and after meeting him, I felt he was blessed with a deeply unique spiritual quality.

I was therefore not surprised that when I read through the show’s official behind-the-scenes book “Hamilton: The Revolution,” the chapter on Jackson featured a beautiful double page photo of him and the rest of the cast backstage holding hands in a circle, their eyes closed, with Jackson leading them in a pre-show meditation (something he does before each performance). His message to his colleagues: “Let’s agree that for the next two and a half hours, this is the most important thing we’ll do in our lives, and that everybody — in the audience, on the stage and in the orchestra pit — will leave the theater a better person than when they walked in.”

Let’s hope that this coming Rosh Hashanah, we can approach our services as the most important things we’ll do in our lives, and that everybody — the congregants, the clergy, the volunteer ushers — will leave the synagogue a better person than when they walked in.

Let that be the story we live to tell.
Posted by Rabbi Daniel Bouskila at 6:48 PM No comments: