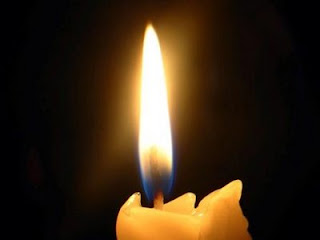 Today is Yom Ha-Shoah, Holocaust Memorial Day. In memory of our 6 Million brothers and sisters who were brutally murdered in the Shoah, I present this poem composed by Uri Zvi Greenberg, one of Israel's great Hebrew poets.

Born in 1896 in Austria-Hungary, Greenberg moved to Palestine (Israel) in 1924. He was awarded Israel's Bialik Prize three times, and was the recipient of the Israel Prize -- Israel's most prestigious honor -- in 1957. He died in Israel in 1981.

Greenberg's poems are often called "prophecies," as he was one of the few Hebrew literary figures of the 1930's and 40's whose works envisioned and warned of the detruction of European Jewry (S.Y. Agnon was one of the others). Greenberg understood the Holocaust as a great tragedy on multiple levels, amongst them the Jewish indifference to their own destiny. Greenberg's words are powerful, poetic and direct, and he minces no words in "telling it like it is."
Below is one of Greenberg's most powerful reflections on the cruelty and inhumanity of Nazi Europe towards the Jewish people.

We were not likened to dogs
among the Gentiles.
They pity a dog, caress, even kiss him with the Gentile mouth.
For like a puppy, fondled at home, they pamper it, delight in it always.
And when this dog dies - how very much the Gentiles mourn him!

We were not led like sheep to the slaughter in the boxcars,
For like leprous sheep they led us to extinction over all the beautiful landscapes of Europe.

The Gentiles did not handle their sheep as they handled our bodies.
Before slaughter they did not pull out the teeth of their sheep.
They did not strip the wool from their bodies as they did to us.
They did not push the sheep into the fire to make ash of the living
And to scatter the ashes over streams and sewers.

For every cruel torture that any other man may yet do to man in a Gentile country -
He who comes to compare it will state:
He was tortured like a Jew.

Every fright, every terror, every loneliness, every chagrin,
Every murmuring, weeping in the world,
He who compares it will say:
This analogy is of the Jewish kind.

There is no recompense for our disaster, for its circumference is the world.

The whole culture of the Gentile Kingdoms to its peak -
through our blood.

And all its conscience -
through our weeping.
Posted by Rabbi Daniel Bouskila at 11:23 AM No comments: