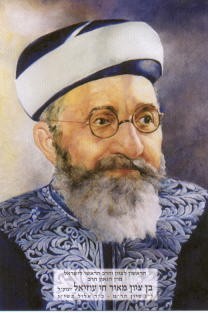 Ever since his death in 1953, most Israelis had never heard of Rabbi Ben-Zion Meir Hai Uziel, Israel’s first Rishon Le-Zion (Sephardic Chief Rabbi). One of the 20th century’s most prolific rabbinic scholars, and a prominent rabbinic and civic leader throughout the formative years of Zionism, Rav Uziel belonged to a different generation, and is thus an unknown figure to most modern Israelis. Every major city in Israel has a “Rechov Ha-Rav Uziel” (Rav Uziel street), but most who walk or drive that street do not know who Rav Uziel is. Thankfully, that is starting to change.

This week I met with Mr. Ezra Barnea, the Director of The Institute for the Publication of Rav Uziel’s Writings. A native and long time resident of Jerusalem, Ezra studied in the Sephardic Talmud Torah in the Old City, in the same buildings that now house our Sephardic Educational Center. An expert in Sephardic manuscripts, music and hazzanut, Ezra sits in a very small office in the Heichal Shlomo building in Jerusalem. His office may be small, but his work is larger than life. With no staff (except his adorable grandson who was in the office that day helping him out), a small advisory board, some dedicated volunteers, a few generous donors, and an old school work ethic combined with a pleasant personality that always greets you with a warm smile, Ezra Barnea has taken it upon himself to edit and publish the massive and precious treasure chest of manuscripts left behind by Rav Uziel. Sitting in Ezra’s office is a true inspiration. Surrounded by books, manuscripts, and a glass case containing Rav Uziel’s beautifully embroidered robe traditionally worn by Sephardic Chief Rabbis, Ezra has singlehandedly created a “Rav Uziel Renaissance” here in Israel.

In just under fifteen years, Ezra has edited and brought to publication 28 volumes of Rav Uziel’s writings…including two new volumes that just came out this week. These beautifully bound and well laid out books include 9 volumes of Rav Uziel’s halakhic responsa (Mishpetei Uziel) dealing with matters of Jewish ritual and civil life, his spiritual writings addressing questions of faith (Hegyonei Uziel), and his commentaries on the Talmud, Maimonides and Pirkei Avot. There are also special volumes addressing specific halakhic issues such as the function of rabbinic courts, the special laws relating to orphans and widows, and the complex laws governing the sabbatical year in Israel. A true treasure are the six volumes that collect all of Rav Uziel’s major speeches, addresses and letters, giving the reader an in depth look into the world of the formative years of the pre-state Zionist Yishuv in Eretz Yisrael, and of Rav Uziel’s active leadership during that period. The two volumes that came out this week are a beautiful collection of all of Rav Uziel’s writings on the topics of Shabbat and all of the Jewish holidays. These books are sold in Judaica bookstores throughout Israel, and now form an integral part of the libraries and Batei Midrash (Study Halls) of many Yeshivot and Jewish Institutions of Higher Learning. They are available to rabbinic judges, yeshiva students, or the educated lay person who is intrigued by the ever relevant classic Sephardic approach of a balanced and moderate approach to halakha, Jewish thought, Zionism, tradition and modernity, written by one of the 20th century’s greatest rabbinic leaders. 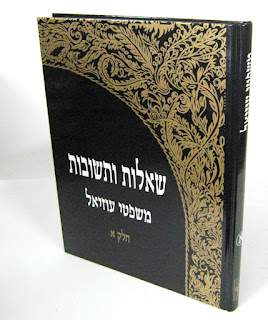 As if publishing these books was not enough, Ezra has also seen to it that Rav Uziel’s story be told on film. The result is a beautifully and professionally produced documentary that chronicles the personal life, leadership career and unique rabbinic approach of Rav Uziel – all in 85 minutes. Watching this film is a journey through several worlds: the Old Sephardic Yishuv in Jerusalem, the pre-State Zionist movement in Eretz Yisrael and the brilliant mind and kind heart of Rav Uziel. Photos, audio and video clips and interviews from family members, rabbis, students and even the entertainer Yehoram Gaon, all speak glowingly of a man who was a defender of tradition in a secular Zionist world, an ardent and pro-active Zionist who believed that the emerging State of Israel was clearly the hand of God, a rabbinic leader who embraced all facets of modern life, and a rabbinic scholar who combined intellect, knowledge, passion and compassion in every halakhic decision that he made. The film was screened on television in Israel, and met with glowing reviews. (I was so moved by the film that I have obtained the rights from Mr. Barnea to screen it at the SEC’s upcoming Sephardic Film Festival in Los Angeles this coming November. The film is currently being subtitled in English, and we are planning a special evening the night it will be screened at the festival. We are proud that our screening will mark the U.S. Premiere of this important film).

Books and films are powerful ways of reaching wide audiences, but if you want an educational message to become part of a society, you have to find a way of reaching students in established schools. I was so excited to learn that after much lobbying by Mr. Barnea, this past school year marked the launching in the Israeli school system of a new “Rav Uziel Curriculum,” officially produced by The State of Israel’s Ministry of Education. The curriculum includes an educational book and DVD with texts, photos, and educational exercises, all relating to the life and teachings of Rav Uziel. The book was produced in a way that it can be used for a variety of age groups. As such, you will find activities for first graders alongside suggested activities for high school students. This efficient system made it possible to introduce this curriculum throughout the Israeli school system, now making it a fixture in Israel’s required Judaic subjects. 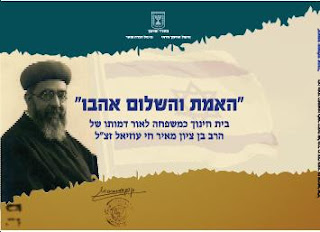 Conversion to Judaism is arguably Israel’s most controversial internal issue today. “Who Is A Jew?” and “Who Is A Rabbi” are core questions that stand at the center of Israeli society’s identity crisis as a “Jewish State.” Long before these became politicized matters between rival rabbinic factions in Israel, Rav Uziel dealt with these questions for the emerging Jewish state. Jews were coming to Eretz Yisrael from all over the world, and, as reflected in Rav Uziel’s halakhic responsa, intermarriage is nothing new in the Jewish world. As such, the halakhic questions of conversions and Jewish identity, the status of children from mixed marriages, and the halakhic requirements for conversions by rabbinic courts were all matters that Rav Uziel dealt with extensively during his career.

Because of this current crisis plaguing Israeli society (and Jews everywhere), Ezra has commissioned Israeli scholar Zvi Zohar to write a special book dealing with Rav Uziel’s halakhic approach to conversion. An expert in Sephardic Halakhic responsa (and a friend and lecturer at the SEC in Jerusalem and Los Angeles), Professor Zohar’s book will certainly present today’s rabbinic leaders with a challenge that – if accepted – will transform the world of conversion to something much less complicated, and virtually free of controversy. In his desire to foster a Judaism that was inclusive and welcoming, Rav Uziel legislated halakhic rulings that made converting to Judaism a positive and inspirational experience, without compromising halakhic matters. Rav Uziel’s approach was inspired by this week’s Torah portion, Parashat Ekev, where we are taught that God “Loves the Stranger (Ger),” and that we “Shall love the stranger (ger).” The Hebrew word for stranger (ger) is the same word used by halakha for converts.  I look forward to Professor Zohar’s book, and the positive impact it will hopefully make for the Jewish people. 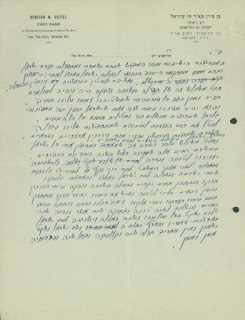 When I was with Mr. Barnea this week, I discussed with him my possibly undertaking the translation of selections of Rav Uziel’s works into English. One of my projects with the Sephardic Educational Center is to spread the good word of Classic Sephardic Judaism to as wide an audience as possible, and I feel that Rav Uziel’s works are the best place to begin. We spoke about creating an anthology reflecting a cross section of Rav Uziel’s halakhic responsa, his Jewish thought articles, and some of his speeches and letters. This would be a “Rav Uziel Reader,” and the goal would be to introduce Rav Uziel’s writings to the general Jewish public in the U.S., and to hopefully integrate his teachings into Jewish schools. Mr. Barnea was very supportive of this idea. To date, the only book about Rav Uziel available in English is an excellent biography written by my colleague Rabbi Marc Angel. Titled “Loving Truth and Peace: The Grand Religious Worldview of Rabbi Benzion Uziel,” it is a book I strongly recommend. The creation of this anthology/reader would complement Rabbi Angel’s book, giving students the opportunity to read actual texts by Rav Uziel.

In the spirit of my suggestion to Ezra Barnea, and in the spirit of this week’s haftarah that deals with comforting the Jewish people after the destruction of Jerusalem, I will now translate a selection from the new volume on the Jewish holidays. Rav Uziel wrote these comforting and inspirational words after Tisha B’Av, 1933:

We must remove this divisiveness that plagues us, and instead make our work as a community a reflection of peace and love. But who will stand and lead this change amongst us? This specific task belongs to the “Faithful in Israel,” our rabbinic and spiritual leaders. This belongs to them, because the Torah is not an alienating force; rather it is a force that brings people closer together. The true announcement of the redemption and the coming of the Messiah will only happen when the hearts of parents are drawn closer to their children, and the hearts of children are drawn closer to their parents. It is about time that the “Faithful in Israel” unite forces in their sacred work, and unite the entire Nation of Israel around them. Such unity, of spiritual leaders working together, unifying our people as one, will serve as our greatest source of comfort and strength, especially during these times when the waves of evil are spreading over all Jews -- (1933 – The Rise of the Nazis).

Quite a grand vision – rabbis working together, leading to the unification of the Jewish people. Indeed sounds messianic (especially the part about rabbis working together), but were he alive today, with the “waves of evil” once again threatening to spread over Jews, Rav Uziel would speak the exact same message.

This past week, I had three separate meetings in Jerusalem with potential partners who are all interested in my biggest dream for the SEC, and for the Jewish world – the creation of a new rabbinical training program that will train rabbis in the classic Sephardic mode of Rav Uziel. With the publication of his books by Ezra Barnea, the inclusion of his teachings into the Israeli educational system, Zvi Zohar’s upcoming book on conversion, the screening of the film at our festival, and the possible creation of a new English anthology/reader, this current “Rav Uziel Renaissance” will reach higher heights if and when we have a new generation of rabbis and educators who can teach and spread Rav Uziel’s teachings to a new generation of Jews all over the world.

In the spirit of comforting messages after Tisha B’Av, it’s good to see the Classic Sephardic mode of Judaism – especially through the figure of Rav Uziel -- enjoying a renaissance, slowly but surely making it’s way back into Israeli society and the Jewish world.

Posted by Rabbi Daniel Bouskila at 2:03 PM No comments: