I wasn’t born when JFK was shot, but I certainly remember where I was when Israeli Prime Minister Yitzhak Rabin was gunned down by an extremist. It was Shabbat, November 4, 1995 (12 Heshvan, 5756, on the Hebrew Calendar). I was about to sit down to Shabbat lunch with a group of students in the synagogue, when someone came in to inform me that Rabin had been shot at a peace rally in Tel Aviv. Were it not for the two weddings I was scheduled to officiate at that week, I would have flown to Israel to attend the funeral.

I remember every moment of Rabin’s Funeral. I remember the moving tribute delivered by his granddaughter Noa, who opened her eulogy by saying “Forgive me if I don’t speak about the peace process today, for I wish instead to speak about my grandfather.”

I remember President Clinton – who brought me to tears with his “Shalom Haver” remarks moments after the assassination – moving me yet again, this time by delivering a “Dvar Torah” on that week’s parasha: “This week, Jews all around the world are studying the Torah portion in which God tests the faith of Abraham, patriarch of the Jews and the Arabs. He commands Abraham to sacrifice Yitzhak. ‘Take your son, the one you love, Yitzhak.’ As we all know, as Abraham, in loyalty to God, was about to kill his son, God spared Yitzhak. Now God tests our faith even more terribly, for he has taken our Yitzhak.”

Last year at this time, I was privileged to travel to Israel with Israeli Consul General Jacob Dayan and seventeen other rabbis for a three day mission to Israel. Our very first stop was the site of Rabin’s assassination, where the consul laid a wreath, and I was honored with leading the “El Malei Rachamim” prayer.

This year, I am back in Los Angeles, the same city where I was fifteen years ago when Rabin was assassinated. This week marks the fifteenth anniversary of the assassination (on the Hebrew calendar), and official ceremonies were held throughout Israel. This week, we read the same Torah portion – Parashat Vayera – that was read the week of Rabin’s funeral, the parasha of “Akedat Yitzhak" (The Binding of Isaac). This week, I look back at that unforgettable funeral, and I remember one more feature that stands out in my mind more than any speeches: the fact that a Jewish funeral took place in Israel where the deceased was surrounded and eulogized by Jews and Arabs.

I remember how Rabin was publicly eulogized (in this order) by Israeli President Ezer Weizman, King Hussein of Jordan, acting Prime Minister Shimon Peres and Egyptian President Hosni Mubarak. A Jew, followed by an Arab, followed by a Jew, followed by an Arab, all standing together at one graveside in Israel, eulogizing one Jewish leader. I think about the children who were born that year in Israel. They probably have a hard time understanding how such an integrated funeral was really possible, given the Middle East they have witnessed since they were born. 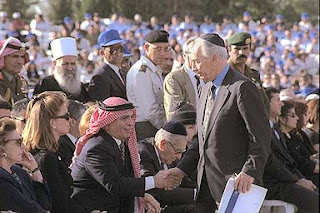 As I reflect on that moment, I ponder the spiritual significance of Rabin’s funeral. Was Rabin's funeral, which brought together Jews and Arabs for one brief moment, a first in Middle East history?

At the end of next week's Torah portion, Hayei Sarah, the Torah describes the death and burial of Abraham. A "father of a multitude of nations," Abraham fathered two sons, Isaac and Ishmael, whose offspring were unfortunately doomed to struggle with one another for thousands of years. Having one common father in Abraham, each son's offspring were poised to become "great nations." The Jewish people trace their lineage through Isaac, for God told Abraham "it is through Isaac that offspring shall be continued for you." The Arabs, and later the Muslims, trace their heritage to Ishmael, of whom God said to Abraham, "I will make a nation of him, too, for he is your seed." Each son was destined to be a leader of his own people.

After growing up together briefly, the half brothers were separated, Isaac's family going one way and Ishmael and his mother Hagar going in another direction. They were separated from one another for some 70 years. During that time, according to the Midrash, Isaac actually had gone to visit Hagar. We do not really know the purpose of the visit, but perhaps it was Isaac's overture at reconciliation between the half brothers.

Then Abraham dies. "And Abraham was gathered to his kin. His sons Isaac and Ishmael buried him in the Cave of Machpelah." The Talmud describes Ishmael's attendance at his father's funeral as an act of "teshuvah." To do teshuvah means to return. Ishmael returned to his father and to his half brother, Isaac. Was Ishmael's teshuvah a response to Isaac's earlier visit to his home? We will never know.

All we know is that Isaac and Ishmael, Jew and Arab, stood together at their father's graveside, tending to Abraham's burial needs together, each probably having delivered moving eulogies for all of "Abraham's kin" to hear at the funeral.

It is an unfortunate fact of history that the momentum of Isaac and Ishmael standing together at their father's graveside was not carried into the future of their respective people's history.

Similarly, it is unfortunate that when a funeral similar to Abraham's took place just fifteen years ago, the momentum of that event was not carried forward equally by both sides beyond Rabin's graveside.

Posted by Rabbi Daniel Bouskila at 4:58 AM No comments: